PP8A Fencing Being Torn Down by Developer Without Notice

On 29/5/2013, around 9:10 am, the RA was notified by our security guard that part of the fencing dividing playground and PP8B had been torn down by the developer paving inroad to our enclosed or fenced up G&G community scheme, thus perforating our security border. This was indeed a shocking news especially to PP8A residents, as there was no notice given to the RA and/or residents prior to this action. We urge the developer to be more thoughtful as all PP8A residents or house owners are your earnest customers, should we deserved to be treated unfairly and wilfully from the purchaser point of view?? we owe the developer not a single cent under the S&P but Plenitude Permai owes us a duty of responsibility and a host of other amenities including good infrastructure works like the repairing of sunken road and sink holes, guard-house was handed over without electricity, water, land title and building approval, last but not least the disputable playground. We, being an inexperienced RA had to face all these encumbrances and predicament alone.

Please be noted that PP8A residents had gone through a very difficult period on their own for setting up of this gated and guarded community scheme from scratch throughout the years without any technical or financial help from the developer. All expenses were paid and still being maintained by the residents. In fact, the government and local authority is strongly encouraging the residents themselves through the formation of a registered RA to setup own security system and resident vigilant neighbourhood (Kawasan Rukun Tetangga). For your information, just a few days ago our RA had received a government grant of RM10,000.00 to complement the effort by the resident association in taking over the welfare and security of their own Taman thereby accomplishing the objective of creating safe and harmonious neighbourhoods in the country.

Thus, we hope after this incident or lesson, there will be a direct and sincere discussion among all related parties before any  harsh or drastic action like this to be taken in the future as our RA is a registered and recognised entity and our communication channels are always opened. All our RA committee members phone, email is no secret to anyone.

Meanwhile, we were advised to make a police report and this matter had been brought to the attention of MPSepang Councillors and the Pengarah of Perancang and Bangunan including the enforcement.  All residents please stay calm and alert of any latest development.

Pegawai MPSepang examining the blue print produced by the developer after notification from our chairman, behind standing & talking on phone is the Pengarah Bangunan. 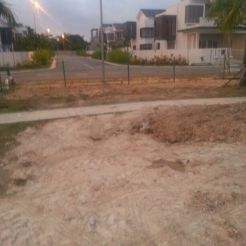 It is not uncommon to have spotted different species of lovely sunbirds feeding on hibiscus nectar along the main road behind our entrance guard house. The RA has spent hundreds of Ringgit on fertilizer to nourish the plant to ensure plenty of hibiscus flower nectar for the sunbird while keeping our Taman entrance always looks  green, flowery, healthy and vibrant.

The RA is not only entrusted to look after the security system, environment, plants but also sunbird and nesting place for the native white breasted waterhen, greater coucal, peaceful dove, kingfisher……and many more species of bird nesting at the river side wetland so as to maintain the ecosystem and conservation of its biodiversity.

Sunbird is printed on Malaysian stamp

Olive Backed Sunbird  Nectarina jugularis Yellow-breasted Sunbird, Kelichap Bukit  (Malay) (太阳鸟)  is a species of sunbird found from Southern Asia to Australia. It has adapted well to humans, and is now common even in fairly densely populated areas, even forming their nests in human dwellings. The sunbirds are a group of very small Old World passerine birds which feed largely on nectar, although they will also take insects, especially when feeding young. Their flight is fast and direct on their short wings. Most species can take nectar by hovering, but usually perch to feed most of the time. Flower tubes that bar access to nectar because of their shape, are simply punctured at the base near the nectarines.  (see photo below)

Sunbird is printed on Singaporean dollar

Male sunbird feeding on blue morning glory at my garden

Full bloom morning glory attracted many sunbird to my garden

Punctured at the base near the nectarines to feed

The ROS had remitted RM10,000 Grant to our RA bank account

Beware of Snatch Theft, it is getting rampant in Taman Mas and Taman Putra Prima 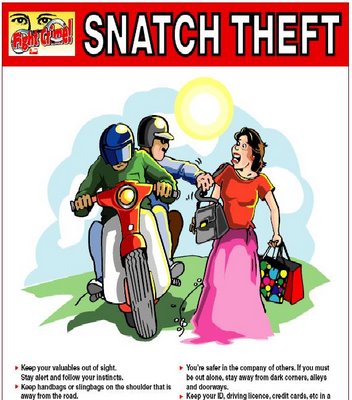 My wife was a victim of snatch theft happened right in front of my factory in Taman Mas under broad day light and dozens of eye witnesses yesterday (8:50am 21/5/2013). The incident happened so fast in just a split of seconds, all my workers ran out and tried to chase for the robbers but couldn’t out run the motorbike ridding by them. She was dragged away  by the motorbike and thrown off  in the air and fell several meters away, she sustained bruise and injury on several parts of her body and was rushed to clinic for treatment. A police report was made.

The whole incident was captured and recorded by CCTV  cameras installed at my factory, police had taken copy of the recorded episode for investigation.

Later I met with Ketua Balai Polis Putra Perdana  S/Insp Aziz Bin Ali and Ahli Majlis Zone Taman Mas Mr Pulanthran to discuss about the subject on prevention of crime in our zone.

Being a community leader, I vowed to spare no effort  and hold no hesitation to wage a campaign/war against crime in our area.

snatching hand bag when passing by

All law enforcement agencies, including local authorities and NGOs, must work together to fight this scourge which is a bane in our society.

Gotong Royong need not be an organized event

Gotong Royong /Communal work is when a gathering takes place to accomplish a task or to hold a competition. The Spirit of Gotong Royong is originated from Java Indonesia and the conception of sociality is familiar to large parts of Malaysia.

Gotong Royong can begin at the modest scale from our very own family, between our neighbour or even just on your own as individual during the week-end or any evening. It need not be organised by the local council, ADUN, RA or any other body… So let us do our part as a landscape and environment loving resident by cleaning and trimming your own yard and common area surrounding you regularly. These eventually will turn your home into a most well-kept community in Taman Putra Prima that all 8A residents are very much cherished and proud of.

“Never doubt that a small group of thoughtful, committed citizens can change the world. Indeed, it’s the only thing that ever has.” –Margaret Mead

Picking rubbish in common area like play ground is the duty of every resident, let us inculcate gotong royong as our habitual practice

If each resident could help to carry or shoulder a little, we can accomplish an enormous task

Since September 2012, the prices of terrace houses in Taman Putra Prima had been very uncertain,  dipping from Nov-2011 and fluctuating erratically or unprecedentedly and plummet after Feb-2013 to a shocking depth. 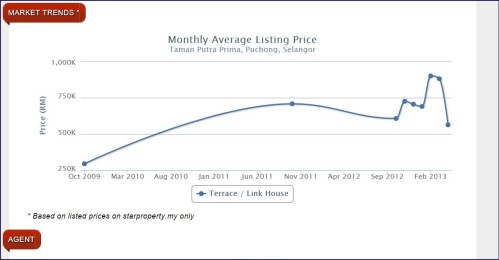 Source from Starproperty, see link below

Could this erractic phenomenon due to the following reasons:???????????? 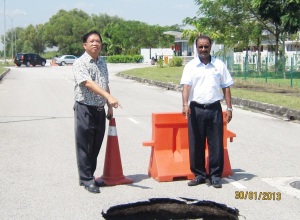