2 cars were stranded by flood at Jalan Putra Prima Utara 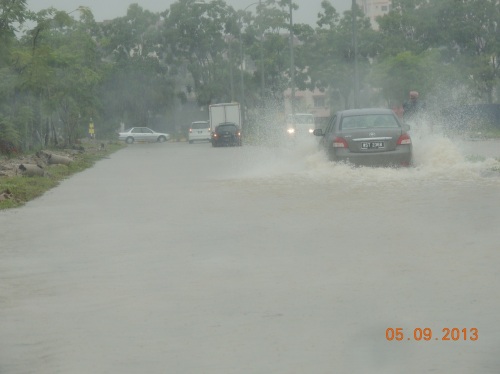 2 cars were stranded near the tee junction

A morning heavy downpour had flooded the western end portion of poor drainage newly re-built Jalan Putra Prima Utara. 2 cars were stranded while many cars were back off and making  detour.

This morning incident was immediately reported to the Majlis via whatsApp upload. The MPSepang engineering department officer responded to me follow by immediate deployment of excavator to open up some ditches in an attempt to ease off the discharge of flood water.

At the meantime, the Majlis had already commenced drainage flow diversion construction works where drain water flow is re-diverted directly to Taman Mas main  monsoon drain instead of poorly flowing to the water retention basin. The main problem is  the storm water retention level is relatively high and embankment or retaining structure was made for the purpose of slowing down storm water from rapidly discharging into the nearby Klang river, thus causing poor drainge and stagnant water at the flood spot.

Hopefully after the drainage diversion work completed, there will be no more flooding to our newly re-built sunken road.

Majlis called to open up ditches

excavation to lay box culvert across the road to Taman Mas

The flow of drain water is diverting to Taman Mas from here.

2 cars were stranded near the tee junction